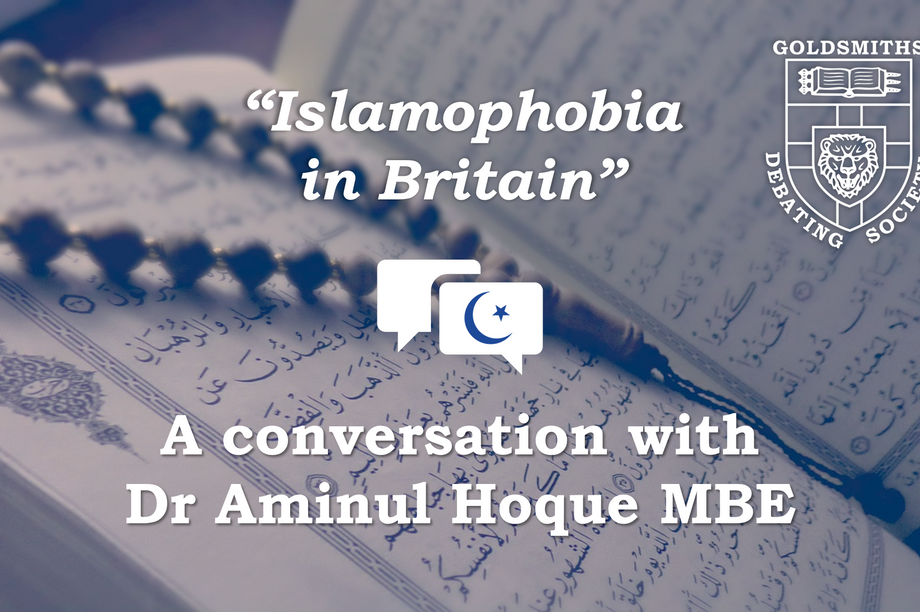 "Islamophobia in Britain" - Hosted by the Goldsmiths Debating Society

Islamophobia is a systemic problem that manifests itself across society in various ways, at times clearly noticeable and at other times more subtly, resulting in the exclusion of Muslims from fully enjoying their freedoms, rights and opportunities as equal citizens. The Goldsmiths Debating Society firmly believes in the importance of giving a voice to perspectives and experiences which have historically been locked out of the conversation, and as such is proud to be hosting "Islamophobia in Britain"​​​​​​, a conversation with Dr Aminul Hoque MBE. This event will run as an online public interview via Zoom, taking place from 6pm-7:30pm on Thursday the 3rd of December. A link to join the Zoom meeting will be emailed out beforehand to all ticket holders.

Our interviewee, Dr Aminul Hoque MBE, is a lecturer in the Educational Studies department at Goldsmiths and author of the book British Islamic Identity: Third Generation Bangladeshis from East London (2015). Born in Bangladesh, his family came to the UK when he was just three years old. He considers himself a ‘British-Bangladeshi’ and a ‘Londoner’.  Aminul's writing and work focuses on issues of multicultural Britain, identity, social justice, youth policy, religion, race relations and Islamic feminism. As well as getting to listen our conversation with him, there will also be a QandA portion at the end where audience members will also have the opportunity to pitch questions of their own to Aminul for further discussion.

To hear important lived experiences being given a platform and to educate yourself on how to become an effective anti-Islamophobe - you definitely don't want to miss this event!

Promote with usPrivacy policyTerms and Conditions